Check out the Local Info tab for info on the suggested places to patronize in the lodging  department. Same deal as last year !! That's all for now folks .

I want to throw a bit of promo out for a Grinder that is going down in Colorado called Colorado Dirt !! 135 + miles and at least three climbs to 10,000ft !! Check the details here
http://www.digdeepsports.com/coloradodirt.html
Posted by Chad Q at 7:29 PM No comments:

Planning is under way at this time. I've been busy with course layout and the Q sheets for the 2013 version of this beast. We have secured some very nice sponsor's for this years event as well. For more current updates check in on the Odin's Facebook page. There has been a flurry of activity there on sponsor's,sign up info and the like. I also have an actual .com site that will hopefully be up and running soon. Here is the FB link https://www.facebook.com/OdinsRevenge

The dust is still settling on the Inaugural 2012 Odin’s Revenge gravel race.  The terrain and weather in Western Nebraska proved treacherous for those who took the challenge this year.  Of the 28 riders who were brave enough to take the starting line, only six were still on their bikes by the end of the day.
The morning began with a cool fog and the distant rumble of thunderstorms to the South.  Within a few hours, the morning gave way to high humidity and triple-digit temperatures.  The stifling heat began to take its toll as rider after rider dropped from the roster.  Although, only six individuals finished the race, many individual tests of strength showed that this field had strength of character in spades.  It’s the shared suffering and respect for each other’s efforts that take a group of cyclists and makes them a community.  Gravel Racers; Thanks for allowing Odin’s Revenge to become a part of that community.
A full account of the events is in the works, but for now this will have to suffice.  More pictures and commentary can be found at the Odin’s Revenge Facebook Page.

A selection of pics from the day:

With the dust clearing on an incredible inaugural running of Odin's Revenge, we are preparing to give a full report.  What a tremendous day . . .
Posted by Llama at 11:44 AM No comments:

Just a couple of additional notes;  Everything is pretty much ready to go.  Note that during check-in, we will have live music brought to you by Paul Siebert from 4-7 with the riders meeting to follow.  Look for the awnings on the North side of the KOA office.

We have some great items from out sponsors to give away in addition to prizes for the top finishers and the cool awards below. 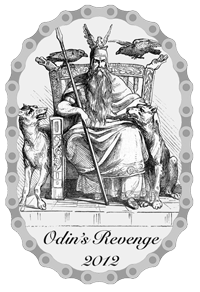 Odin’s Revenge is a self-supported gravel and dirt road adventure. The course winds through the terrain of West-Central Nebraska. The name is inspired by the Swedish and German heritage of the host town of Gothenburg. Odin is identified as the “king of the norse gods” and is known for his penchant for wisdom and suffering.